Sorry for the delay in updating the kitchen project; it’s going slower than expected due to the fact that I can’t just toss stuff in bins, it has to be sorted away as I go. 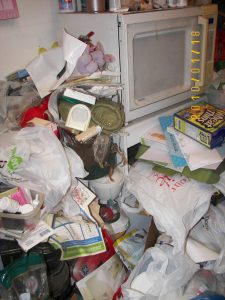 So, in response to requests (emphatic ones, I might add 😉 ), and without further ado, here’s an updated picture of progress so far.

Clearly there’s still a long way to go, but there is a hint of microwave stand peeking out there, and in the bottom left there’s part of a coffee maker starting to appear.  I guess there really is some visible progress, isn’t there?

It’s these slogging projects that have killed me in the past.  Quick ones where I can just recycle stuff, or toss it in bins for the shed are instantly rewarding, but these tend to bog down in lack of visible progress.

I’ll aim to have another update in 3-4 days to see what kind of progress happens then.  Eventually…. I have to keep telling myself that EVENTUALLY this will be good.