After a few days of dedicated excavating, I’ve cleared a space in the studio to put filled boxes. Granted, much of the space was gained at the expense of filling in the centre part that I’d cleared previously, but there it is. I managed to fill two recycling bags and a large orange garbage bag in the process, so I’m counting it as overall progress, even though it looks much worse than it did, and I can no longer get to my computer. That, too, will change. By my calculations, I have enough space for 36 boxes at the moment. Hopefully that will increase as stuff gets moved and relocated.

The space immediately after being cleared: 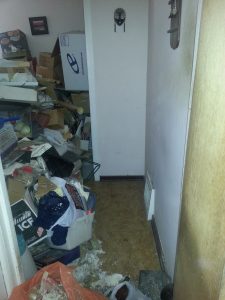 The space with its first selection of boxes: 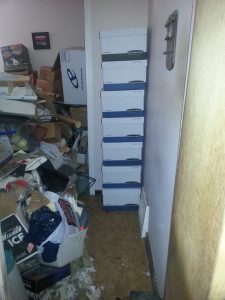 For anyone who’s curious, I can stack the boxes 9 high if I stretch and don’t put anything too heavy on the top.